The True Face of the Universe 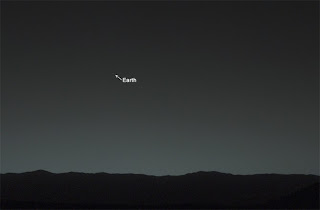 With all the recent talk about NASA taking up the goal of a manned mission to Mars, spawning out of a civilian funded colonization mission called Mars One, I thought I would do a space-related post.

This is the immense stature of the universe.  An ocean so vast that, even were we to colonize Mars, we would only just barely have seen the shoreline of the galaxy, let alone began wading in yet, in the vast expanse of space, where hundreds of billions of stars exist in just our galaxy, which is only one of hundreds of billions of galaxy's. Trillions of stars, surrounded by trillions of planets, throughout millions of trillions of miles more than our minds, at this time, can even comprehend. Space is not just the final frontier, it is the manifest destiny of the modern age,  the ideal of the Mars colonization projects must be pushed through to succeed, not to 'claim space' which would be impossible in nearly every sense of the sentiment, but to push humanity forward, into the vast, limitless universe.  A nebula is gorgeous when viewed from hundreds of millions of miles away, 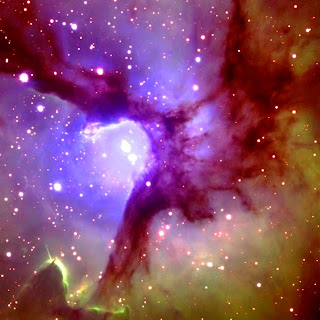 but can you imagine being as close to it as Pluto is to the Sun?  To the right is a picture of the Trifid Nebula, some, roughly 5 thousand lightyears away from Earth.   A light-year is the amount of distance light can travel in one earth year.  The speed of light is roughly 200 thousand miles PER second.   And this nebula is at such a distance that it takes light  5 thousand years (roughly) to reach Earth.  This image, this moment, now frozen in time, is older than any nation on Earth today.  Well, parts of it are, some parts are older or younger, as the Trifid Nebula is fairly massive.

Thanks for checking out my post on Space, let me know what you think.  Sorry I have been out of it for a while, will work on making sure posts are a more regular thing.

Of Learning Languages and gathering resources

So, recently, while looking at learning other languages, I found this amazing site, that I hope grows even more, because it is an awesome site, it's called 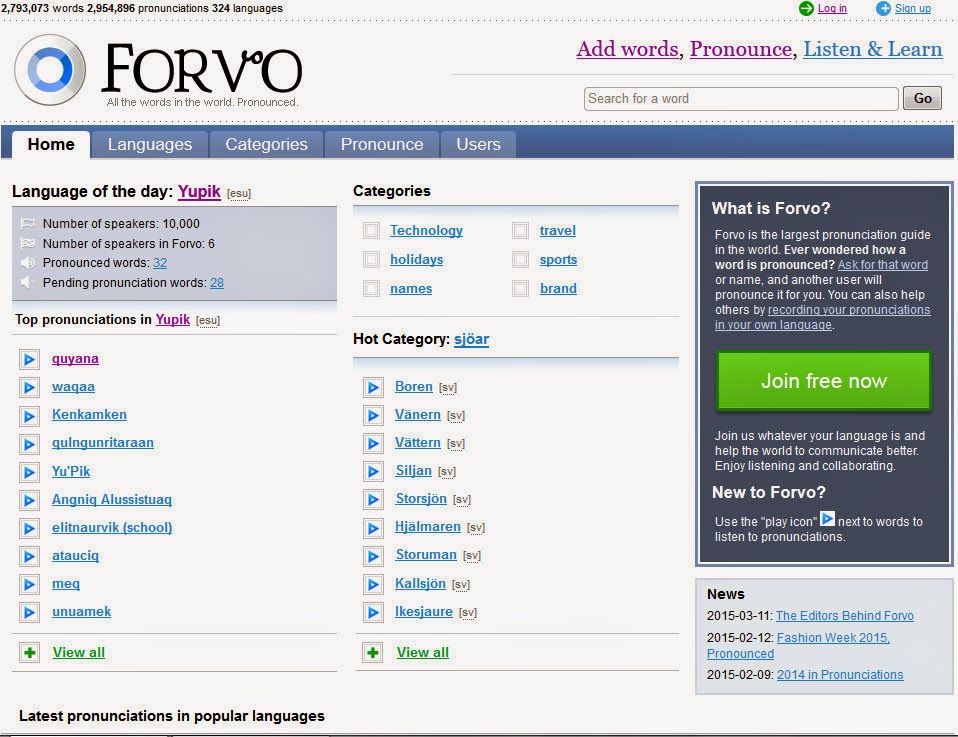 Forvo. It is a website in which users create a profile, and can upload recordings of words being said.  Seems simple enough, but it is incredibly helpful for those who may be learning a new language, they can see how certain words are pronounced, depending on how popular the word is, as well as the language, you may see the translations for it in other languages.  If I look up the word:  Word:   I find that 29 different people have put up recordings of 'Word' and I also see other recordings of words or common phrases that include 'Word',  I can also see that there are 27 different recorded translations of 'Word' currently on Forvo, such as the Vietnamese translation, which is lời, which according to the translation, sounds like 'loy'. 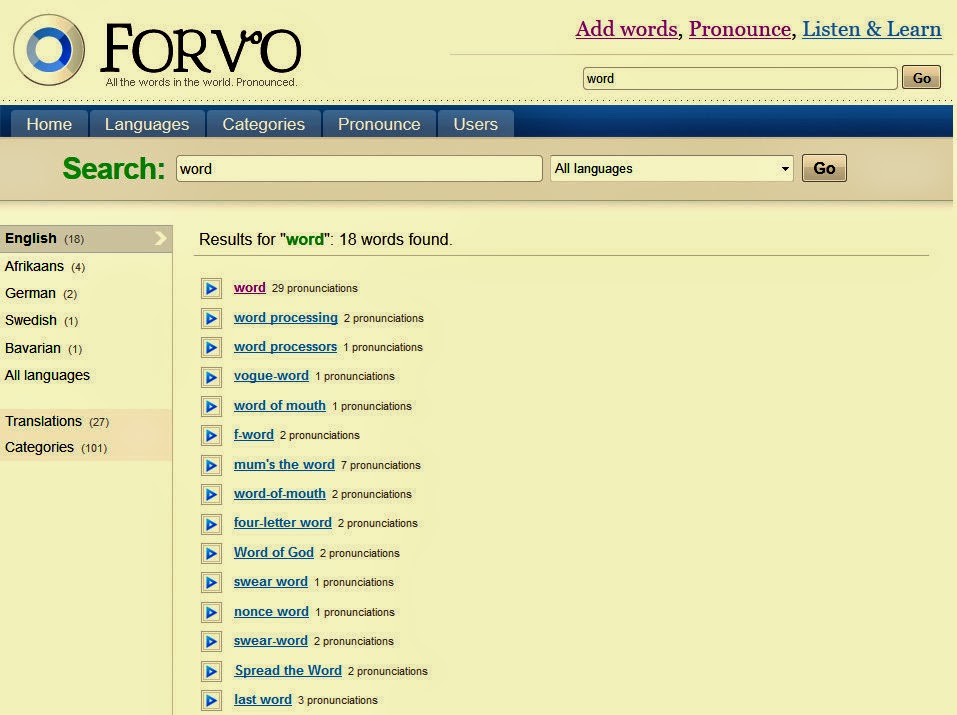 You can also add words if they are not on there already, or add your own recording if your accent is not represented, you can go to a page that generates 30 (thirty) random words that you can listen to and learn for fun,  you can also customize the language of the site itself into a number of languages, such as English, German, Japanese, Vietnamese, and quite a few others, some of which I don't know how to read.

So, it does require some slight knowledge of the desired language to be of real use, but it can serve as a wonderful secondary tool to help learn a new language.  Or you can just use it for fun and learn a new word or dos (two)


Thanks for taking the time to visit my blog, let me know what you think, if you have any questions I can try to answer them, or if you think there is a blog topic you might enjoy seeing, let me know.  If you would like to follow, I don't always post on the same topics, sometimes it's government, this time it was language learning :D.
Posted by Robert at 3:50 PM 4 comments:

On Taxes and Safety Nets

So, taxes are in the news, a lot, not just lately either, it's pretty much always been a thing, just some of us don't notice till we are older, and PART of the tax paying community.


Now, there are, in the United States, a hundred different types of taxes, from Sales Tax, to Alcohol Tax, however, in this post, I will be talking specifically about that most dreaded tax.  The Income Tax.  The one EVERYONE has hate for, from the very bottom of the lowest earning families all the way to the richest, Koch brotherliest families.

To set the ground, I am personally not for increasing the tax burden specifically on rich people 'simply because they can afford it'.   That's a silly argument.  If you can afford to pay McDonalds 10 dollars for a single cheeseburger, instead of the couple dollars it is, should you? 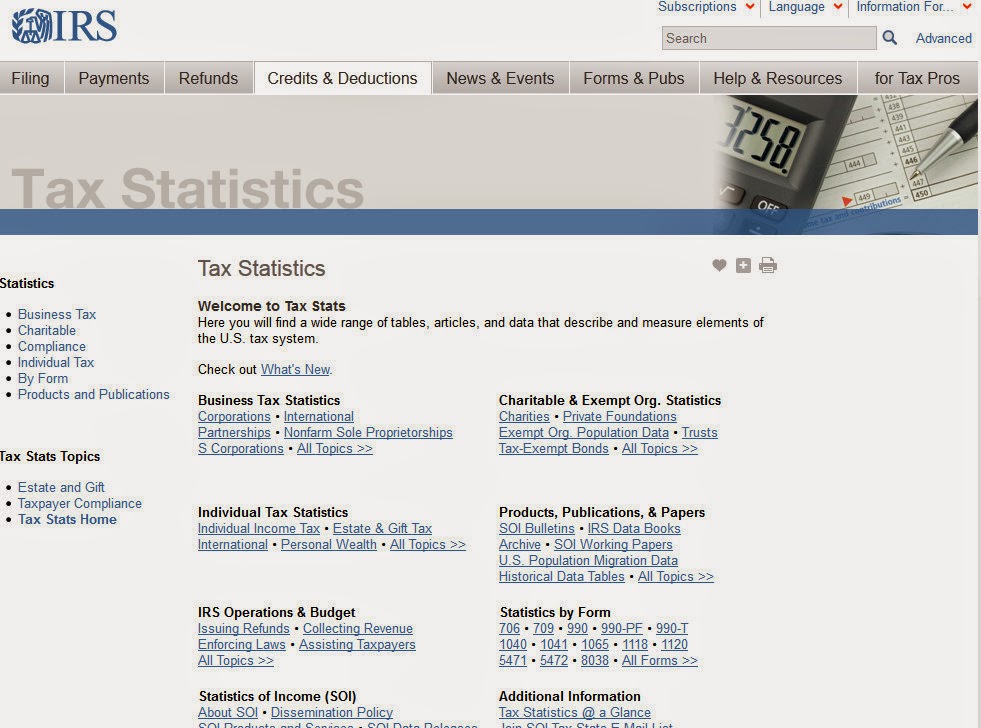 So, according to the IRS websites Income Tax Statistics section for the Tax Year of 2012, income tax on all households was a 'little' over 1(One) trillion dollars.  Seriously.  It actually sat at around 1.18 trillion, I use the little rabbit ears, because while it's only a little over 1 trillion, that still comes to around a hundred billion dollars.


Let me know what you think, if you have any questions, I will do my best to answer them, leave a comment if you'd like, follow if you would like, check back in later, not all topics posted on my blog will be about tax or financial issues, some will be about government in general, some will just be about stuff I may be interested in learning about.
Posted by Robert at 2:26 PM 1 comment: